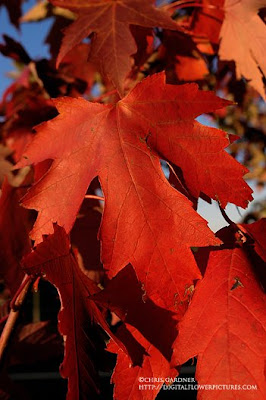 There will probably quite a few fall shots on Skywatch this week. These were taken on my drive on Sunday afternoon. The trees are absolutely beautiful this year. I am still trying to figure out how to take a good landscape shot of the colors. I really should have brought a tripod.

This first picture is a parking lot tree. I am not sure what it is. It was much darker red than a Sugar Maple but had the habit of one. It might be a Freeman’s Maple (Acer rubrum var. saccharinum), which is a cross between Sugar and Red Maples. That wouldn’t be true if this was a wild tree but since it was planted it is probably a cultivar or in this case a hybrid. There is a little sky poking in from behind. 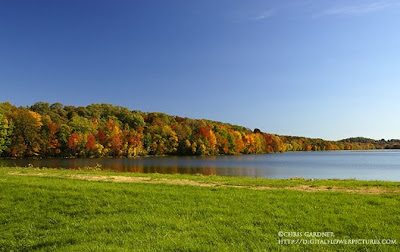 This second shot is a blooper. It was the first time that I was using the new polarizer filter and it was turned the wrong way. You can see it only polarized the left side of the photo. At least it was polarizing most of the foliage. This is the kind of shot that needed a little more reach than the 24mm. It was taken sticking through a hole in the gate of a chain link fence behind a little shopping center. For fun I thought I would try and post a map of exactly where it was taken (Margerie Reservoir in New Fairfield, Connecticut).

This last picture was taken in Newtown and it is kind of a swampy pond. The colors were just right as I drove by there yesterday and most of the leaves had fallen. 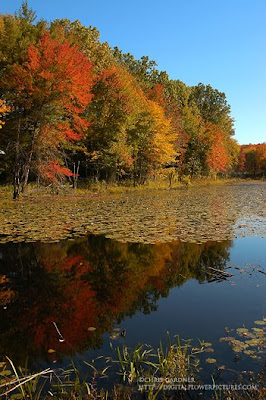 To see over 300 skies from around the world check out:
Skywatch Friday
Posted by Digital Flower Pictures at 10:00 PM

I think you have taken a great landscape of colours. Your photos are beautiful and in that last one it looks like you could walk on water.
Happy SWF.

I just love the colours of the Maples during autumn! - Beautiful pictures! I wish the foliage could remain on the trees 'til spring!
Katarina

These autumn colours are so rich and vibrant. Gorgeous images.

Beautiful range of pics! And enjoyed the comments with them too!

That swamp pond is most awesome. I didn´t mind your blooper, looked good to me.

Beautiful fall foliage shots. I especially like the last one with the pond reflections. I invite you to come see my sky views from the BC Ferry to Powell River. -- Margy

They're all beautiful, but I think I like your "blooper" the best!

Love the bits of sky peeping out from behind the leaves. Your second shot probably is enhanced by your little glitch, as the vibranr colous on the left are neatly balenced by the darker moodyer side.
The pond shot is just heaven.

Your trees are about where ours are! I love your shot with the reflections in it....very cool....

Happy autumn, Chris. Your photos as always are stunning.