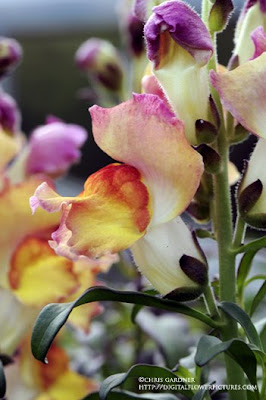 This winter there were some Snapdragons posted here and at that time I said that I would like to try and grow some this year. Yesterday there were some at the nursery and there were also a few holes in the container garden and borders so I got 18 of them. The plants were from the ‘Crown’ series and not knowing exactly what that meant I decided to take a chance. That was one of the days that I wished I had a Blackberry so that information could be easily looked up. 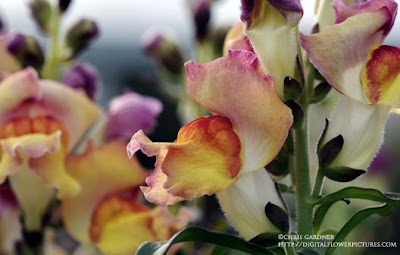 After they were planted and I got home to look up the information I found my own post of October 28, 2008 on the ‘Crown Red’ Snapdragons we had seen in Sonoma, California. Since we are growing them now I wanted more information and see that they are considered an intermediate type with a final height in the garden of about 18 inches. That will work out nicely so we got lucky.
Posted by Digital Flower Pictures at 8:10 AM

I really really like that Candy Corn Snap. What great colors.

Interesting snap dragons. I always loved them but they don't do very well in our climate.