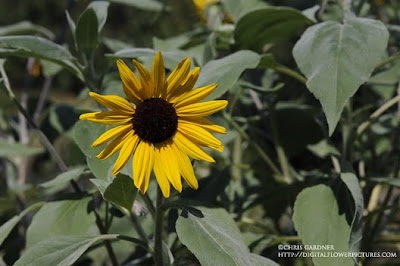 This bold fellow was blooming in Central Park a few weeks ago. The Sunflowers did really well considering that we didn’t really get that much sun around here this summer. They add so much to the summer and fall garden. This flower, which I am assuming was a cultivar, really had nice grayish blue green foliage. The size of the flower was large but not really over powering. It was just about the size.

Wow, was it windy here yesterday. We also got a half inch of rain before the winds arrived. I heard of a peak gust of 46 mph (around 75 kph) but think it was more like in the 30 mph range where I was. There were several roads closed on the way home and numerous power outages that made driving a little difficult. We will be picking sticks for a long while.

This shot was a try at recreating the black and white Sunflower that was posted here in September. In some ways it worked and in other ways it didn’t. 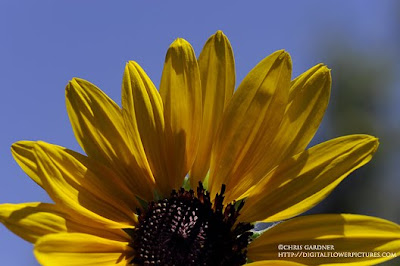 Work has been pretty busy and today we are making the big Chrysanthemum planting (150). The other thing we have been doing is a transplanting rampage. Since a lot of our gardens are starting to mature there are plants that I have resisted moving in the past that have simply gotten too big. They have to move now. Once we started it has gotten to be interesting. Having a lot of space to try some new things and some mature plants to plug some holes has been great. This probably should have been done years ago but I tend to hang on to the way things are in the garden. A bold stroke is sometimes needed and can bring about a nice feeling of change.
Posted by Digital Flower Pictures at 6:05 AM

thanks for the great photo of the sunflower it is gorgeous!