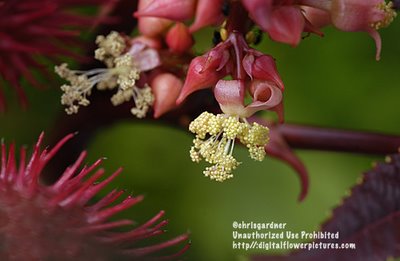 Having grown Castor Bean before I am no stranger to its red foliage and bright red spiky beans. The stems are also a nice red color. I don’t have any this year but in the past it must have been some named cultivar because it was a much more attractive plant than the species. At Wave Hill, and I will be featuring things I saw there most of the week, it was planted next to a black top pathway. There was an old granite wall in the back and that showed the plant’s color nicely. I hadn’t noticed the showy sepals of the male flower before taking this picture. They are really small and you have to look inside the plant to see them. Some people consider this plant a pernicious weed, but I have never had it come back in the garden.

There is only one species in the genus. It is a native of Europe and it’s history dates back to the Egyptian times of 4000 BC. The seeds are very poisonous and if you’re growing this with small children around the garden consider removing the flowers and seeds. You will still have the nice, boldly palmate foliage. Castor Oil is extracted from the seeds without the ricin and has been used for lighting and medicinal purposes for centuries.
Posted by Digital Flower Pictures at 6:09 AM