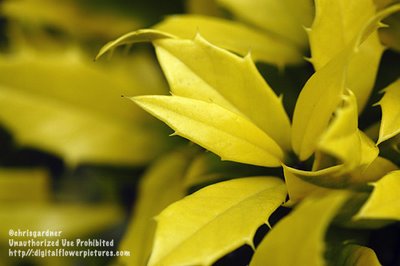 I saw this one at Polly Hill Arboretum on Martha’s Vineyard. Personally I love gold foliaged plants but I guess they are not for everyone. I think they look great as an accent and if used judiciously and sparingly they can add some drama to the garden. I haven’t grown this one personally so I am relying on information that I researched.

‘Sunny Foster’ was a leaf mutation of ‘Foster No. 2’ discovered in 1964 at the U.S. National Arboretum. The original ‘Foster’ Holly was part of a group of hybrids between Ilex cassine x Ilex opaca. It was released in March, 1982. It has nonmarginal variegation of yellow in the upper third of the leaf that deepens during the season. Planting in full sun intensifies this. The plant at Polly Hill was almost all yellow but the hint of green added a nice touch to the appearance. This plant is hardy in Zone 7 (USDA).

I wanted to thank the staff of the Arboretum for emailing with the identification of the plants that I asked about. They were really nice to take the time. The staff was very friendly while we at the garden also.
Posted by Digital Flower Pictures at 6:26 AM

Just wanted to say that I'm enjoying all of your pictures--thanks so much for posting them!

Blackswamp_girl thanks for leaving the nice comments. I am glad someone out there likes it.