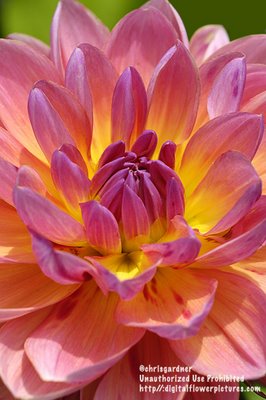 I saw this beautiful cultivar of waterlily type Dahlia at Wave Hill. The light was hitting it just right and showed all the wonderful colors. I have become partial to the waterlily Dahlias. Cactus Dahlia are still my favorite, followed by the Dinnerplates. Waterlily types are running a strong third. I think they are a subgroup of the Decorative types.

This snip of information on Waterlily Dahlias is from: http://www.dahliaworld.co.uk, a very cool site about Dahlias.
“Waterlily dahlias have fully double blooms characterized by broad and generally sparse ray florets, which are straight or slightly involute along their length giving the flower a shallow appearance. The depth should be less than half the diameter of the bloom.”

The Dahlias in my gardens are doing well this year. Not too much fungus and insect problems. They have produced a lot of flowers but haven’t grown very tall. This was the first year I ordered some mixed Dahlias and I was happy with the selection they sent. It was nice to be surprised when the flowers opened. I also bought a couple of named cultivars.

Wave Hill had a lot of purple foliage types (these might actually be called dark foliage) and they were quite nice. I will have to try some next year.
Posted by Digital Flower Pictures at 6:14 AM

I love looking at your pictures--you have such an eye for intriguing color!