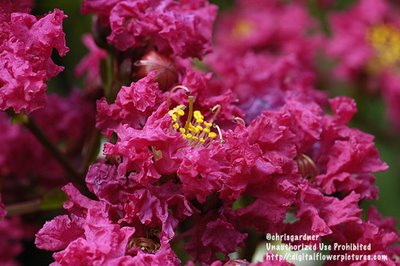 I am always so jealous when I go to an area and see gardeners growing Crepe Myrtles. When I went out to Long Island a couple of weeks ago the Crepe Myrtles were just coming into to flower, which was a special treat for me. I really like the darker flowered varieties but a group of whites that I saw was very attractive. This gem was growing in a pot at Wave Hill. I never considered trying to grow it in a container. I actually have a few plants under cultivation here in Connecticut. One is ‘Hopi’ which for 10 years did great and then 2 years ago got burned to the ground. It is coming back but it is going to be a long and slow process. I have another cultivar named ‘Zuni’ growing in Darien. It is blooming very well this year. This garden is slightly warmer (more south and closer to Long Island Sound) then where the ‘Hopi’ was growing. The ‘Zuni’ is very pretty but it still has a shrub form and is not attaining that beautiful tree-like structure that I admire so much. I also have a species of Crepe Myrtle in one garden. I am not sure which one it is. I will probably have to find out now and update this. It is a little smaller growing and the bark has a richer rust color in places. It has been in about 5 or 6 years now and has never bloomed.

Crape Myrtles are a member of the Loosestrife family (Lythraceae) with about 25 cultivated species in the genus. The breeding program at the United States National Arboretum during the 1950’s is responsible for our easy to grow and beautiful Crape Myrtles. The cultivars are all named after Native American tribes.

I am headed out to Martha’s Vineyard for the weekend. I will probably not get to post Sunday or Monday.
Posted by Digital Flower Pictures at 5:21 AM